Recently, the Flight For Life–Waukesha Base had a special visitor. Former patient, young Sam Phillipson, stopped by to say “hello,” and brought along his sister, Julia, and mom, Carole. Sam is a typical, rambunctious five-year-old (but he minded his mom very well!) – who explored the lobby, went up and down the stairs to the second floor, stopped to visit in the Communications Center, and trotted down the hallway to the hangar. He hoped to see the helicopter, but it was out on a flight. 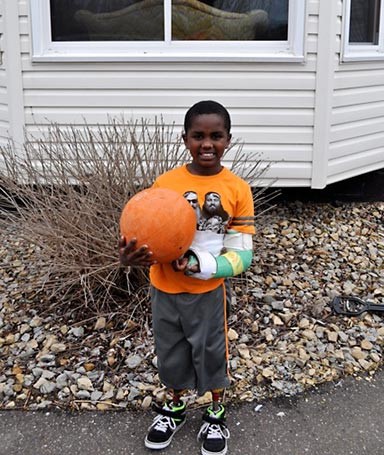 That all sounds fairly typical for a kindergarten-aged boy, but what made this so remarkable is that Sam did this on his two, below-the-knee, limb prostheses. It is hard to believe that, almost two years ago, on a crisp, sunny, fall day, Sam was involved in a tragic lawnmower accident while playing in his backyard. Resulting injuries included complete amputations of his left lower leg and right foot at the ankle, a left hip fracture/dislocation, an extensive de-gloving wound to his back and buttocks, and partial amputation of his left arm above the elbow. The trauma system (including Jefferson County Sheriff’s Department-Dispatch Center, Sullivan EMS, and Flight For Life) worked to rapidly evacuate Sam to the Level I Pediatric Trauma Center at Children’s Hospital of Wisconsin (CHW). Multiple teams of caregivers worked tirelessly to give Sam the chance to survive.

As we all know, though, it takes more than medicine to surmount the incredible challenges Sam experienced.

A devoted family, with courage, hope, determination, and prayers (along with Sam’s inimitable spirit), partnered with wonderful physicians, nurses, therapists, dietitians, and many other caring staff at the hospital to make a little miracle happen. Nine weeks after his admission, Sam was discharged home. By then, he was tooling around on a small, Sam-sized wheelchair. The family also connected with Shriner’s Hospital for Children – Twin Cities (Minnesota), who are now instrumental in the next phase of Sam’s recovery by providing his artificial limbs. Within months, he was fitted with his first pair of “Tiger Legs” (so named after the decorative design on the new prosthetic legs).

Sam now enjoys showing everyone his new “Happy Feet,” nicknamed after the fun penguin motif on the second pair of artificial legs. During his visit, Sam showed us how his legs clip on and off, talked about how much he enjoys going to school – especially recess, where he runs around with all of his friends, and carefully wrote his name on a sheet of paper. He then asked his mom what happened to his “real legs.” Needless to say, Carole takes all of his questions with ease and answers them in stride. The entire family, including Carole, dad Marty, adopted siblings Paul and Sam (brothers, from Ethiopia), Julia (from China), and Mary (biological daughter), have learned to adapt and grow together.

Sam will occasionally remark on his traumatic experience; as is often the case, much of it stays buried in his memory. When Carole recently said to him: “You know how much we were praying for you when you were on the way to the hospital,” Sam replied that, during the trip, he reached up and “held God’s hand.” During Sam’s transport to CHW, flight nurse Rebecca had Sam’s right hand grasped firmly in hers. Sam knew that God was helping her out.