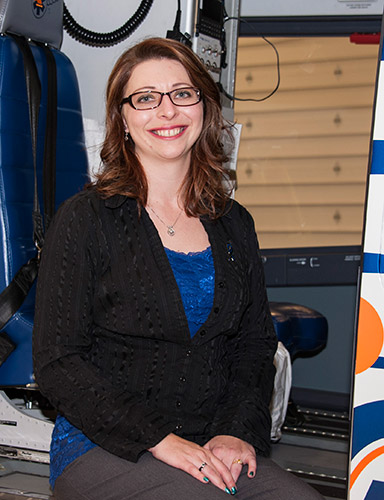 I have no recollection of the accident or most of the first week. One of the paramedics on the scene was a family friend. Apparently I screamed his name once I knew he was there. After a prolonged extrication, I was transported by ambulance to Watertown Memorial Hospital where I was immediately transported by FFL and taken to Froedtert where I remained for 8 days. My recovery process took almost a full year. There was a time when I was uncertain if I would even walk again due to my injuries. I would frequently ask myself “Why did this have to happen to me?” Eventually I did recover, and thought that if the medical personnel were not there for me, I would not be alive. So as a thank you to give back for what they did, in 2002 I joined Lake Mills EMS and became an EMT. In 2003 I joined Lake Mills Fire Department and went to fire school. Being with those agencies, I had the opportunity to work on scenes with FFL on various occasions.

In late 2004, I was hired as a dispatcher with Oconomowoc Police Department. I still get to assist the community, but from a different angle. In 2009 I met the person I was going to marry, Donald Bishop. We met via radio as he worked at another dispatch center. He too was a firefighter, EMT, dispatcher, and in 2011 became a police officer. He owned his own radio services business, and was constantly doing things for various public safety entities, only for the betterment of the community. He always said “Be part of the solution, not part of the problem.”

April 3, 2013 I was having a rough day at work. When I got home from work, I was almost in tears. Don met me at the door, telling me to change my clothes and we would go for a drink. That night we had the greatest conversation any two people could have. We were preparing for the closing of our dream home, and we thanked each other for being each other’s best friend. Everything we were planning for our life together was falling into place, and we started talking about my accident.

He said “The reason why you survived that accident was to be here with me.” At that moment, it all made sense.

April 13th, 2013 was the day that changed my life forever. Don and I had just picked out new flooring, new countertops, and paint colors for our new home.

Don had left for work at 10:20 pm like normal. I was designing our new closet layouts on grid paper. After a few hours, I decided to get some ice cream. As I was scooping my ice cream, I heard a knock on the door. I thought “Oh, Don’s home. He’s here to get his turtleneck that he forgot.” I opened the door and saw a group of men in uniform. I scanned the group and fixated on one face and said “Chief?” as I backed away from the door. At that moment I knew. I kept saying “This is not happening.” It was the Town of Brookfield Police Department command staff and chaplain at my door, there to notify me that Don was gone. He had passed from a cardiac incident while responding to a burglary in progress call, at the age of 32. We were less than two weeks from closing on our house, where a week and a half earlier Don told me the reason I was still alive was to be here with him. And now he was gone.

It has now been 13 months since Don has passed. This by far has been a more difficult recovery than that caused by my accident. I am still employed with the Oconomowoc Police Department, and in June I will start dispatching part-time for Jefferson County. I was recently asked to be on the executive board of a new organization being formed in the State, which will provide assistance to officers injured in the line of duty in Wisconsin. I was honored to have been asked, and gladly accepted. I look back and realize that I would not have been asked to be on this board had Don not passed away, would not have met Don had I not been hired at Oconomowoc PD, would not have been hired at the PD had I not been a FF/EMT, and would not have even entered into a career in public safety had I not survived my accident.

What would Don do?

I feel there is a reason why my life was not taken that day back in July. I frequently ask myself “What would Don do?” and he would say “Be part of the solution, not part of the problem.”

The 14 year path that has led me to where I am today, all started on July 10th, 2000. My less than ideal experiences have ultimately turned into opportunities to help others. I believe that part of my purpose is to help others any way that I can, and that is what I will continue to do.

On March 19, 2014, Kim Thome and her daughters Hayley and Madison were in a single car rollover accident. While coming up on a small hill they hit snow and ice that caused them to spin and ultimately roll the vehicle over 4 or 5 times. Kim was ejected from the vehicle while the girls stayed belted safely inside.

Comments for "Accident Leads to Career in Public Safety"