On a brisk January evening in 1993, Brad Caddock and his brother decided to go skiing at Sunburst Ski Hill in Kewaskum. At that time, Brad was a high school junior and active in a variety of sports, including cross-country, track, and skiing. He was also in an early entry program for a military career and had just attended his first meeting. Little did he know that his life’s path was going to take an abrupt turn.

While going down a ski run with his brother and a few friends, Brad was struck full force by an “out-of-control” skier who was coming down an adjacent advanced ski run. He was flung 20-25 feet, landing on his head on the frozen ground under the snow pack. Although he was initially conscious, the following circumstances were primarily recounted from his brother and others at the scene, and his caregivers.

Brad had sustained a depressed skull fracture – with some significant loss of blood at the scene – as well as a fractured forearm. Flight For Life was called to transport him to Froedtert Hospital; his family was told that he had only a 3-5% chance to survive his injuries.

Beyond that, his prognosis to return to a “normal” lifestyle was uncertain. He was immediately taken to the operating room to repair his skull fracture, and was kept in a drug-induced coma and under heavy sedation/restraints for five days post-op to allow his brain some time to heal. 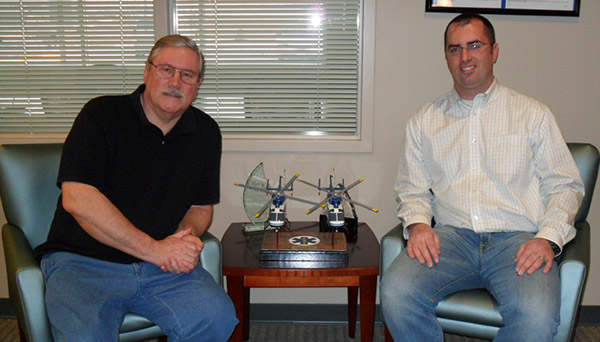 When his clinicians brought him out of the coma, Brad became aware that he could not feel his left leg or move it at all. Multiple diagnostic tests were given to determine the source of the problem. Was it related to his injured brain or some other unrelated, undiscovered problem? After a battery of x-rays, CAT scans, and MRIs, a ruptured disc was found in the lumbo-sacral area of his spine. A therapist cautioned Brad, “You may never walk again.” One day later, Brad underwent surgery; post-operatively, he was immediately able to move his left leg, but could not yet stand up for several more days because his blood pressure dropped when positioned upright.

“When I was able to get up and walk for the very first time, I had to think about each step I took, and how to move my leg to go about 15 feet.”

Miraculously, although he did not recall anything after being struck on the ski hill, his other cognitive functions were intact except for some short term memory loss. After a three-week stay at Froedtert – one week in intensive care and two weeks on the neurological unit rehabilitation floor – Brad was discharged to Community Memorial Hospital in Menomonee Falls for additional aggressive rehab therapy. He recalls that, at age 17, he was by far the youngest person in rehab, with his closest floor mate in the fifties. He remained there for one week, with intensive evaluations by physical and occupational therapists – assessing his cognitive performance and ability to execute ADLs (“Activities of Daily Living”).

At the end of February, Brad went home to continue his road to recovery.

Outpatient therapy continued, as well as initiating four hours per day of class work to begin inserting himself back into the school curriculum. He not only had to catch up with the school work that he had missed since his hospitalization, but his brain was continuing to heal; he had to follow a very structured schedule of lessons to “make up” classes while he was continuing with his rehabilitation. Brad had a great variety of tutors to work with and, with dogged perseverance and a commitment to achieve complete recovery, he was able to graduate with his senior class! Brad smiled when he said that he was honored to be named Senior Captain in his three favorite sports along the journey!

Unfortunately, his injuries made him medically ineligible to continue on in his goal towards a military career. But Brad discovered that he enjoyed classes in Criminal Justice and, upon graduation, began work full time with the Brown Deer Police Department. He became a Crime Prevention Officer in 2000, and has enjoyed working with a “new” canine partner – a Dutch shepherd named “Justis” – in 2008.

Flight For Life was just a small link in the chain of survival for Brad. His story of survival and recovery is an example to everyone how important family, friends, and personal motivation is to turn tragedy into triumph for those who persist to achieve their goals.